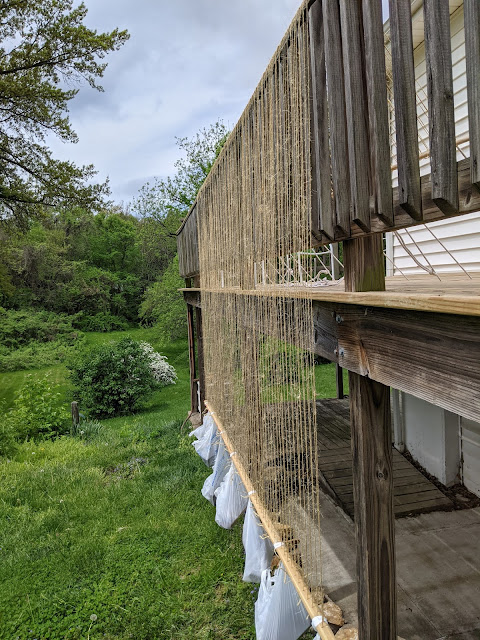 As spring returned to the midwest in March, I began reconsidering the idea of building a big loom out on the deck.  A fellow weaver had suggested to me last year that I consider making a hanging loom, and I had looked at photos of hanging looms, but the application of the concept didn't occur to me until one afternoon in early April, when I was out in the yard with the dog. While she wandered around in the grass, I studied the side of the deck. I wasn't looking for anything in particular, but after a moment I saw what could be the space for Big Loom 2021: a potential width of about 24 feet from one end of the deck to the other, with a height of between 8 1/2 feet to 10 feet from the ground to the top of the deck railing.

A whole lot of maybes flooded my brain in that moment. Maybe I could suspend the warp from a beam at the top of the deck railing? Maybe I could put a beam at the bottom of the warp, too, and weigh it down with something across the bottom in order to distribute the weight evenly across the width of the loom? Maybe the force of gravity would pull on the warp threads and put more tension on them? And maybe I could apply the warp threads so they could be adjusted individually or as pairs rather than as one long continuous length? Maybe by drilling holes in the beams at top and bottom and threading the warp threads through the holes? Maybe that would make tightening the threads easier? And maybe I could pull the warp over the top of the deck railing and tie it in place with ropes that could be untied and their length adjusted as I wove in order to move the whole piece up or down?

So many questions. So many possibilities. So many solutions to find. I retrieved a couple of 1x2 boards from storage and drilled two holes per inch for a distance of 11 feet on the first board. Then, putting the first board on top of the second board, I repeated the hole-drilling process with the second board. I measured the distance from ground to top of deck railing in order to determine how long the warp should be; it ranged from 98" high to 104" at midpoint to 112" over the distance of 12 feet. The lower beam had to be parallel to the deck railing, not the ground, so I needed to select a length no longer than 98". But because I had to allow room for the weights to hang from the lower beam, that would shorten my weaving space by at least a couple of feet. But wait.... What if I extended the warp over the top of the deck railing and tied the top beam in place with ropes that could be lengthened or shortened as needed so I could weave more than 98"? That would put tension on the warp from the top beam; combined with the weights on the bottom beam, there would be tension on the warp from both directions. This is essentially how my rigid heddle loom works: by applying tension from front and back -- or top and bottom, if you turn the loom on end. This will work!

I purchased a 2250-foot spool of sisal baling twine to use as warp. Sisal has a rustic look that appeals to my artistic aesthetic. Plus it has a lot of extraneous strands protruding from it, which can create grab to hold on to weft threads. It took a total of about 12 hours to

• measure and mark the holes -- 24 per linear foot -- in the top and bottom beams and drill the holes,

• measure and cut the warp thread/twine into 18-foot lengths,

• thread each 18-foot length of warp thread/twine through a pair of holes in the top beam,

• thread the ends of the warp thread/twine through the holes in the bottom beam and tie each pair loosely,

• drop the bottom beam over the side of the deck railing,

• untangle and stretch the warp thread/twine to its full length (about 9 feet),

• tie the top beam in place on the deck using clothesline rope laced around a deck floor board, 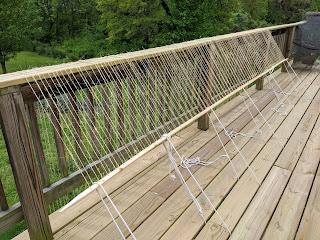 • weight the bottom beam with seven plastic bags, each with a brick inside, and 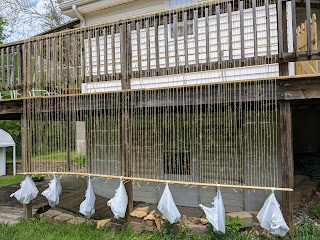 • then retie each pair of warp thread ends so that they are taut. The retying process had to be done a few times as the weight of bricks pulled on the warp tread/twine.

Yesterday, at last, I was ready to start weaving. Using some of the 3,300 yards of yarn made last fall from recycled linens, t-shirts and abandoned fabrics, I wove through the first four inches of warp along the bottom beam. I had to retie a couple of warp threads that were a little loose, but adjusting and retying a pair of warp threads took seconds. All in all, it was a good experience. 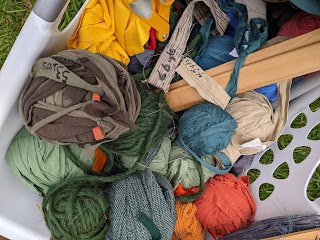 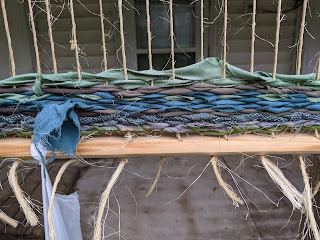 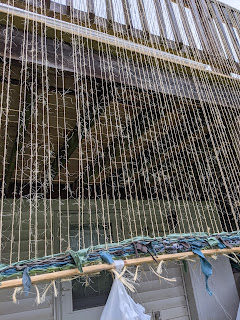 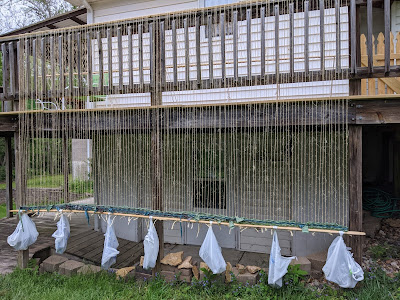 While I was writing this, an ambitious groundhog climbed the steps to the deck and squeezed under the railing to see what was happening topside. I had given thought to what might happen to the weaving in progress if the neighborhood feral cats visited, if birds dropped by, if it rained, or if the sun shone brightly, but I forgot about the groundhogs. If they become inquisitive to the point of chewing on the ropes on the deck, I may have to put a board across the spot where they climb on to the deck. In the meantime, I'll work on the weaving and post images of progress. 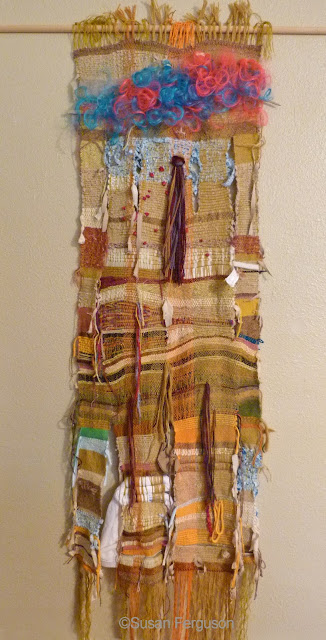 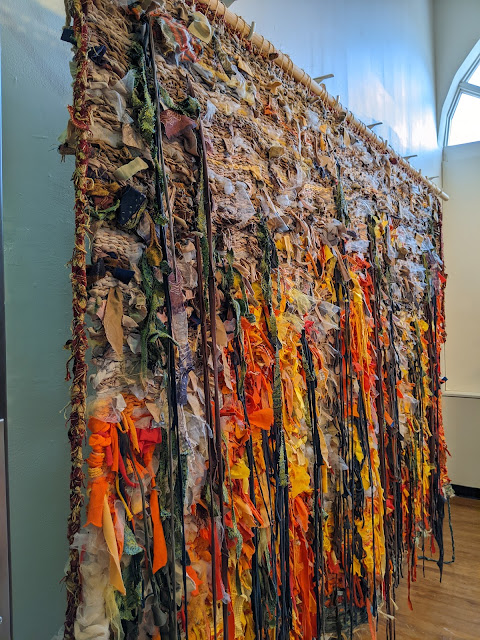